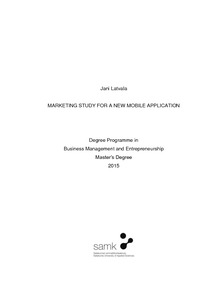 Studying the marketing theory from mobile apps’ point of view and researching how some successful mobile apps were marketed at the beginning helped to find out ideas how to market new mobile application, with minimum budget.

Theory part of the study consists of McCarthy's 4P classification, which was found out to be suitable also for mobile app marketing, and Kotler’s eight steps for developing effective communications.

In the researching part of this study it was studied how some successful mobile apps were marketed before app was launched, around launch time and after launch. Marketing in social networking services at the same time was also studied.

Qualitative research method and best practice benchmarking were used in this study. Information how successful apps Angry Birds, Instagram, Moves, PicLab, Tinder and Yik Yak were marketed in their early days was collected for example from internet news, articles and their social networking service accounts.

This study helped to find many ways to market new mobile app, even with limited budget, and the findings will definitely help to create global marketing communications plan for the mobile app. It remains to be seen if author’s app will become a success story or will it be forgotten among many others.