Dementia in the Elderly : Epidemiology and Care Perspectives in Finland 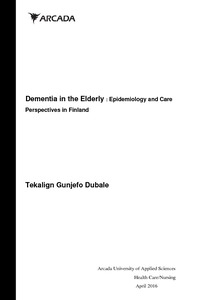 The current demographic shift towards aging population risks dementia epidemic. Particularly, the growing number of old people becomes a concern for public health policy makers. Finland is not an exception in this case. The growing number of old age is associated with subsequent growth in the number of elderly people affected by dementia. This motivated the author to explore the topical issue. Although the study involves investigating the prevailing magnitude of dementia and its risk factors, central focus is given to explore the care philosophies and the nursing roles in care for elderly people with dementia in Finland. To achieve this goal, the study answers the following three research questions: What are the prevalence and incidence rates for dementia? What risk factors contribute for such prevalence? What nursing cares are relevant to the elderly people with dementia? The author used person- cen-tered care (PCC) model for conceptual framework. In order to answer the above research questions, literature review method and inductive content analysis approach were used. Data collection was made from ARCADA library database (EBSCO),Google Scholar and books. Totally, 10 scientific articles were selected for the review. Inclusion-exclusion criteria were applied based on the relevance and year of publication (2007-2015). The major results of the study show that dementia has significant effect on the general public health. This is manifest-ed through its increasing magnitude in the elderly population in Finland. This means the prevalence rate and incidence of dementia in the elderly people is progressively growing in the country. Although the national plan for memory health is designed for the care, it lacks comprehensive approach to address the predicament of the epidemic. Though several care philosophies have been emerged for care of PDs, most of the care approaches recommended the person or the client to be at the center of the care process. This view was substantiated by PCC model applied as conceptual framework in this study. Major risk factors for dementia include modifiable and non-modifiable. The modifiable risk factors incorporate early intervention on the person`s life style (smoking, alcohol) which contribute for vascular diseases. These vascular diseases in turn result in the memory impairment or dementia in the later age.