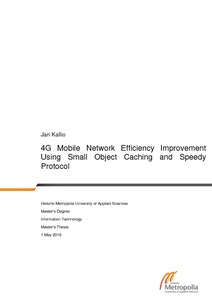 The Hypertext Transfer Protocol (HTTP) is the most widely used application layer protocol today. It is easy to realise because every time a Web connection is opened, HTTP protocol is used over Transmission Control Protocol / Internet Protocol (TCP/IP). It is a so called request – response protocol, where the web browser sends a request to the web server which returns the web content.

HTTP has a long history, starting already in the early nineties with the version 0.9 to the latest version 2. Version 1.1 is still the most common today but it is not suitable to serve the new web page structure which means a very large number of small objects per a single web page. Speedy (SPDY) is Google’s solution trying to handle the HTTP protocol more effectively. SPDY version 2 was chosen as the basis for HTTP version 2.

This study concentrates on comparing HTTP version 1.1 and SPDY performance in a laboratory environment. A 4G network was reserved only for this test period. The web pages were downloaded through HTTP or SPDY proxies and the main topic of interest was the page download time. Web pages include a different number and size of small objects. Another subject of the research was the impact of caching. Different servers were used with caching allowed.

The two most critical issues affecting web page download time are latency and bandwidth. During the test period it was possible to add some delay and change the bandwidth. Because the network was reserved only for this study it was difficult to detect the effect of network load. Limiting the number of physical resource blocks in the base station was used as means to simulate a high usage of the base station.