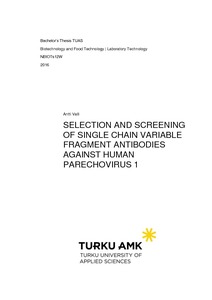 This Bachelor’s Thesis was written in the Department of Virology and Department of Biochemistry/Biotechnology at the University of Turku. The goal of the thesis was to select and screen antibody binders against human parechoviruses from synthetic scFv human antibody libraries. The phage display method was used to express scFv molecules on the surface of phage particles. These were subsequently used in three consecutive panning rounds to identify scFv binders to recombinant viral protein (human parechovirus VP0) that was biotinylated and immobilized onto the bottom of streptavidin coated wells. ScFv phage particles that bound to target protein were inoculated onto bacteria to enrich the phage population and purified, and analyzed further by Eu-Delfia. Increase in specific signals against controls between panning rounds was regarded as a sign of a successful isolation of a phage preparation containing scFv binders specific for viral proteins. The scFv gene was subcloned from phage library to vector pLK06FT, which encodes a scFv-AP-His-FLAG fusion protein. Individual cell clones were identified and scFvs were isolated and screened on pNPP-ELISA. Positive clones were saved for further assay and sequence verification.