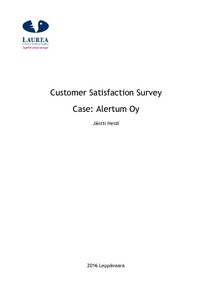 This thesis was implemented for a Finnish company Alertum Oy, during spring 2016. Alertum Oy operates nationwide in Finland at multiple locations, with the main office located in Espoo. Alertum Oy organizes safety courses for manufacturing, construction, transportation and logistics workers. The company also has security officer and first aid courses.

The theoretical part of the thesis discusses the areas that are needed to be understood in order to gain full knowledge of what customer satisfaction means, how it is formed and the factors which affect it. The theory also explains what service and business to business means and includes. These two areas were included to the theory, because the case company is both a service and business to business company.

The goals set for the research were achieved. The research showed that there are functions that would need some adjustments from the company, and also that there are some differences between the different industries that were interviewed for the survey. Based on these findings, sug-gestions were created for the company, which can be implemented inside the company with the help of the employees. The purpose of the suggestions is to help the company make their services even better in the future and at the same time keep customers even more satisfied with the service they receive.