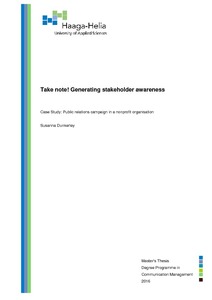 In September 2014, international business association Amcham Finland expanded its operations into the United States, opening an office in New York City. Establishing an office outside Finland was a major development for the nonprofit member association. Situation analysis conducted by management in March 2014 showed that the association’s stakeholders were not aware of the new office. To help inform stakeholders of the upcoming development, a targeted public relations campaign was developed, implemented, and analysed. The strategic goal of the public relations campaign was threefold: generate awareness among key stakeholders, namely the association’s 350 member companies; gain publicity through media to help build the association’s international profile; and contribute to the overall business goal of attracting new member companies.

This case study research examines if the strategic goals of the public relations campaign were achieved by considering: the frequency and type of communication to members specifically related to the U.S. office development; the amount of related media coverage generated; the number of new member companies to join the association during the course of the campaign.

According to the data, member companies were well informed about the new office, news of the U.S. office received considerable media coverage, and 11 new member companies joined the association during the course of the campaign. Based on the findings, the research makes recommendations for developing public relations in nonprofit member associations.