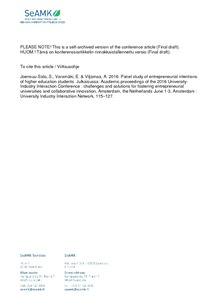 The data used in the study comes from Finland. The population of our study is made of participants from five universities in six different study fields. The data was collected using a self-administered ques-tionnaire in 2009, and in 2011 and 2012. Thus, our data covers the whole study period from the first to the last year. For the analysis we accepted those individuals who had answered in at least two waves. In our data there are 62 individuals with responses from all three data collection waves and 149 individuals with two measurement waves. The change of entrepreneurial intentions was analyzed with linear regression.