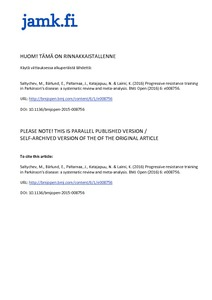 Objectives: To investigate if there is evidence on effectiveness of progressive resistance training in rehabilitation of Parkinson disease.


Design: Systematic review and meta-analysis. Data sources: Central, Medline, Embase, Cinahl, Web of Science, Pedro until May 2014. Randomised controlled or controlled clinical trials. The methodological quality of studies was assessed according to the Cochrane Collaboration's domain-based evaluation framework. Data synthesis: random effects meta-analysis with test for heterogeneity using the I² and pooled estimate as the raw mean difference.


Interventions: Progressive resistance training defined as training consisting of a small number of repetitions until fatigue, allowing sufficient rest between exercises for recovery, and increasing the resistance as the ability to generate force improves.


Comparison: Progressive resistance training versus no treatment, placebo or other treatment in randomised controlled or controlled clinical trials.


Results: Of 516 records, 12 were considered relevant. Nine of them had low risk of bias. All studies were randomised controlled trials conducted on small samples with none or 1 month follow-up after the end of intervention. Of them, six were included in quantitative analysis. Pooled effect sizes of meta-analyses on fast and comfortable walking speed, the 6 min walking test, Timed Up and Go test and maximal oxygen consumption were below the level of minimal clinical significance.


Conclusions: There is so far no evidence on the superiority of progressive resistance training compared with other physical training to support the use of this technique in rehabilitation of Parkinson's disease.