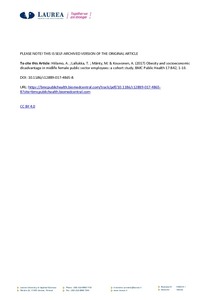 Methods:
Baseline data were derived from the female population of the Helsinki Health Study cohort, comprising 40–60–year-old employees of the City of Helsinki, Finland in 2000–2002 (n= 6913, response rate 69%). The follow-up surveys were carried out in 2007 (n= 5810) and 2012 (n= 5400). Socioeconomic disadvantage was measured by five dichotomous measures. Repeated logistic regression analyses utilising generalized estimating equations (GEE) were used to test the association between baseline self-reported obesity and the likelihood of socioeconomic disadvantage through all phases. The effect of time on the development of inequalities was examined by time interaction terms in random effect logistic regression models.