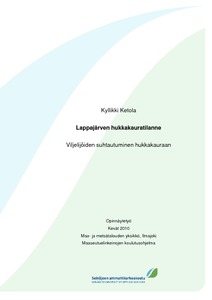 Wild oats is an annual weed that is highly difficult to prevent. Its extensive spreading in Finland started in the 1960’s whit foreign feed corn and seed grain. After that attempts to stop it spreading have been made in a law prescribed in 1976. Nevertheless wild oats keeps spreading with seed grain, machines and animals and has already contaminated about 14 percent of Finland’s arable land. The most common way to remove wild oats is by pulling them up but in severe cases chemical control is recommended.
In this thesis I clear up the situation of wild oats in Lappajärvi. Using a questionnaire I sent to the farmers in Lappajärvi it was possible to get an idea of their attitude towards wild oats and does, for example, the production type, education or the amount of arable land being farmed have any affect on the appearance of wild oats.
The situation of wild oats in Lappajärvi is still fairly good as the arable land contaminated by wild oats is only four percent. From the answers recieved from the questionnaire it can be concluded that the farmers in Lappajärvi are generally well aware of the harmfulness of wild oats and think it’s important to prevent it. Nevertheless there is still some negligence found there and more information is needed.
The results of this thesis can be used as well by the rural authority as well as individual farmers to prevent the spreading of wild oats.