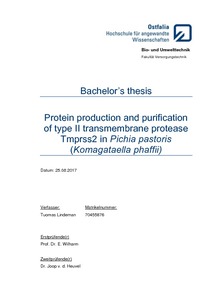 The purpose of this Bachelor’s thesis “Protein production and purification of type II transmembrane protease Tmprss2 in Pichia pastoris (Komagataella phaffii)” is to assess optimization possibilities for production and purification methods of mouse Tmprss2 in Pichia pastoris. The aim of the thesis was to develop upstreaming and downstreaming strategies capable of producing 2 mg amounts of properly folded and active Tmprss2 for crystallization experiments. Solving the crystal structure of Tmprss2 and the enzyme-substrate interaction surface in combination with Hemagglutinin 1 could lead to determining the process of proteolytic activation of Hemagglutinin 1 by Tmprss2.Therefore producing Tmprss2 for crystallization is an essential step for structure-based drug design for Hemagglutinin 1. This thesis is specifically concerned with the cultivation of recombinant Pichia pastoris cell lines in 2 L scale using a bioreactor to demonstrate the potential of iterative methanol induction cultivation mode for Tmprss2 production. The initial hypothesis was that the production of Tmprss2 could be increased with optimized cultivation methods and NiSepharose™ Excel resin material could be utilized in optimizing direct immobilized metal ion affinity chromatography(IMAC) of Tmprss2. It is important to note that for IMAC fusing Tmprss2 with a histidine-tag is required, consequently recombinant expression is necessary for preforming IMAC.

The outcome of this research into protein production and purification of type II transmembrane protease Tmprss2 in Pichia pastoris was a strategy for optimized cultivation of Pichia pastoris cell lines in 2 L scale using a bioreactor in iterative methanol induction cultivation mode. The initial hypothesis was also confirmed as NiSepharose™ Excel resin material could be utilized in direct immobilized metal ion affinity chromatography of Tmprss2 without issues with 4 column stripping common in similar IMAC materials designed for histidine tagged proteins. Tmprss2 was produced in the target amount for crystallization experiments in a single iteration using the Tmprss2-Mut cell line. However, the fast 48 h production Cycle in iterative methanol induction mode would allow pooling the produced Tmprss2 from several successive iterations to reach higher amounts. Pooling the products of several iterations would make reaching sufficient amounts for crystallization of the desired autocatalyzed form of Tmprss2 produced by the Tmprss2-WT possible. The issue with the lowered Hemagglutinin 1 cleaving activity of Tmprss2 D343N produced by the Tmprss2-Mut expression cassette could potentially be countered by coincubation with processed Tmprss2 produced with the WT-Tmprss2 expression cassette. Autocatalyzing the uncleaved Tmprss2 D343N to process it to the truncated form with higher activity would reduce the amount of iterations required to reach ample amounts of active Tmprss2 for crystallization.

The limitations of the developed upstreaming and downstreaming strategies were also recognized. The main issues encountered were loss of Tmprss2 in concentration and through degradation over time. The purification using IMAC was prone to issues with precipitation of the culture supernatant interfering with the process. The iterative methanol induction cultivation mode requires removing the cell culture from the reactor in between iterations causing increased risk of contamination. Further development for countering these limitations were suggested in the form of modified techniques. Loss of protein during concentration might be avoided using a more sophisticated concentration technique i.e. repeated IMAC, diafiltration or TCA precipitation. The degradation of Tmprss2 could be limited by conducting IMAC in 4 °C instead of room temperature. The precipitation problems may be addressed by monitoring and adjusting the concentration of media components throughout the cultivation to prevent building up of materials in successive iterations. Risk of contamination and degradation of Tmprss2 during cultivation could be decreased by implementing continuous cultivation with perfusion membrane for harvesting. The cultivation strategy could also be shifted from aiming to shorten the glycerol growth phase to aiming to run the reactor in ultra-high cell density conditions. Running the reactor in the range of OD> 500; WCW >400 g/L would be a trade-off for increased Tmprss2 total yields at the cost of longer process time for a single batch of Tmprss2. The increased total yields could be reached by upscaling the reactor cultivation based on the methods developed for a 2 L scale bioreactor in iterative methanol induction cultivation mode.