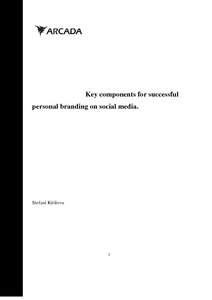 The thesis is about finding the key components for successful personal branding on social media. Thorough research of the Facebook, Youtube and Instagram platforms has been performed in order to better understand the essence of presenting a brand as a personality.
Research of three already established Finnish influencers Youtube, Instagram and Facebook) is in focus. A look has been put to the power of pictures, captions and videos, a comparison between the engagement rates and posting patterns has been made for all three researched influencers in order to notice any reoccurring themes between them that might help readers with their own personal branding action plans. Attention has also been paid to target language, visual quality and quantity of the content as well as controversial topics such as making viral videos and handling negativity. The findings in the empirical part give readers a more concrete example of how they can make revenue by branding their own personality online.

The research is qualitative and the method used is purposive sampling. Three Finnish online influencers on Instagram, youtube and facebook have been chosen and their marketing efforts have been observed for a period of two months during which indicators such as posting patterns, quantity of content, engagement rates and exponential growth have been transcribed with the help of an online software NapoleonCat and the statistics website SocialBlade.