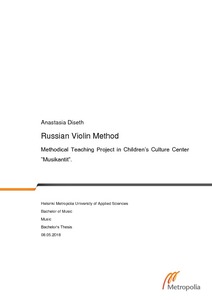 The idea of additional pedagogical boost to the pupils of “Musikantit” was positively received. The question of economical finance was the main obstacle. Children’s Cultural Center “Musikantit” expressed their reluctance of charging more from the parents as the institution is private and the market is difficult and competitive. It also occurs that the field of culture and art is underestimated by the society. The government is constantly cutting down the resources. This manifests the idea amongst the parents as well that the cultural activity is less worthy of investment. Not only economical investment, but also the investment of time, effort and support.

The next step in this process is to seek for economical support to open a collaboration with Russian music institutions in Moscow. Opening a cultural collaboration with Russian music institutions will benefit both the Russian and the Finnish music schools in way of exchanging knowledge and professional experience. In the same time it will work as a cultural bridge builder between the neighbouring countries in this politically separating times.