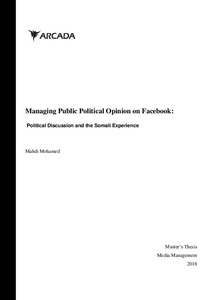 This study investigated why Somalis discuss their political issues on Facebook pages, how those page managers manage these discussions, and to what extent do both managers and participants believe that these discussions influence the political discourse in Somalia. A mixed methods research design was used in this study, in the form of both qualitative and quantitative online surveys. A total of 142 respondents participated in this study: 139 of ordinary Facebook users answered an online quantitative questionnaire, and 3 Facebook page managers, a qualitative email survey. The study found that Somalis use Facebook for political discussions because it is the easiest, most effective and often the only way that they believe they can influence the political process in their country. The result suggests that the political discussions on the Facebook pages by the Somalis are perceived to have an impact on the political decisions in Somalia. Also, the findings show that there are difficulties when managing a Facebook page in this nature, because of poor conduct, negative critique and online harassment. Finally, the study found that Facebook was, and is, used as an alternative to traditional political participation forms in the Somali context