Disaster and Psychology: an Investigation of Psychological Distress and Symptoms of rescue workers : an literature review 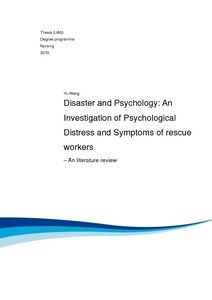 The aim of this study was to investigate the psychological distress and symptoms among disaster rescue workers who involved in the rescue effort in the aftermath of Sichuan earthquake, 2008.
The study was based on literature review on previous conducted researches, after the establishment of literature selecting principle, a number of researches was considered to be qualified and thus a thorough scanning and analysis carried out. The findings was analysed and categorized into different themes.
The findings of this paper suggested the psychological stress from the disaster scene was multi-dimensional, not only the difficult rescue work stresses the rescue crew, but also the stressors raised from the physical environment as well as individuals' own life statues. The symptoms experienced from sampled rescue workers was summarized into 4 categories: psychosomatic symptoms, conceptual symptoms, emotional symptoms and behavioural symptoms.
The implication of this paper were seen to be needed to heighten public's arousal of these potential secondary victims of disaster, and to assist the establish of psychological early stage recognization and intervention for the rescue workers.
This study has certain limitations, that is well discussed in the conclusion chapter, and some unanswered questions were suggested for future studies.