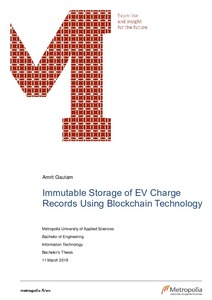 Gautam, Amrit
All rights reserved. This publication is copyrighted. You may download, display and print it for Your own personal use. Commercial use is prohibited.
Näytä kaikki kuvailutiedot
Julkaisun pysyvä osoite on
http://urn.fi/URN:NBN:fi:amk-2019060214126

After the first successful implementation of the decentralized and distributed digital currency, Bitcoin, its core disruptive technology called Blockchain has been the subject of interest for many people and business organizations in order to harness its power. This thesis is an attempt to understand blockchain technology and its use cases in the field of electric mobility. The primary goal of this thesis was to develop a prototype based on blockchain technology, to store immutable charge records of electric vehicles for Liikennevirta Oy, aimed to strengthen trust and data integrity of customers.

The project started with preliminary research on different available platforms in order to find a suitable platform to meet the requirement of the business. Design of the network architecture and the smart contract were done consecutively after the selection of the platform. Manual deployment of the prototype was done to Amazon Cloud Service using a single instance of Elastic Cloud Compute for testing purpose.

As a result, a permissioned blockchain network, a smart contract (chaincode) and a REpresentational State Transfer (REST) Application Programming Interface (API) server were developed using Hyperledger Fabric platform and Hyperledger Composer tool. The charge data record is stored in the nodes of the network when the electric vehicle charging process is initiated or stopped. Another potential use case of blockchain technology to build a decentralized roaming platform for electric mobility providers has been realized and discussed in this thesis.

In conclusion, Blockchain technology itself leaves no doubt for maintaining the integrity of stored data. However, it has no control over the truth of the data being asked to be stored as it is influenced by outside factors such as human and sensors. The developed prototype also relies on the authenticity of data supplied by charging stations to provide trust and transparency.