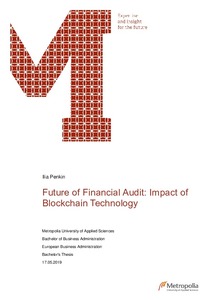 Penkin, Ilia
All rights reserved. This publication is copyrighted. You may download, display and print it for Your own personal use. Commercial use is prohibited.
Näytä kaikki kuvailutiedot
Julkaisun pysyvä osoite on
http://urn.fi/URN:NBN:fi:amk-2019060615233

The technology of blockchain has been raising interest in different industries, be that law and economics, or information technology and finance. Blockchain became known for the fact that it is the technology behind such cryptocurrency as bitcoin. However, this technology is much more than just the backbone of a cryptocurrency. It enables peer-to-peer transactions between participants with no trust whatsoever as well as it has the potential to disrupt many fields.
The purpose of this thesis is to showcase the possible implications of the implementation of blockchain technology into the domains of audit and assurance.
In order to answer the research question, we reviewed three research papers discussing the possibilities of implementing blockchain into the domains of audit and assurance. In the first one, in order to increase the verifiability of business data, provide options to share data with interested parties instantly, and store the data itself in a more secure manner a triple entry accounting is suggested which in addition to the conventional double entry registry would also submit transaction data into the blockchain. Consequently, if such new accounting system would be implemented, there would be a need for the assurance possesses to be adjusted accordingly. It is viewed, that the concept of blockchain based assurance would increase the auditability of the information, with the use of smart controls it would allow near real-time assurance, as well as automate most of the auditors’ manual tasks.
Another research prepared by the Chartered Professional Accountants of Canada (CPA Canada) and the American Institute of CPAs (AICPA) analyses in an illustrative way how such a technological advancement as blockchain could evolve the professions of audit and assurance and as a result suggest new possible functions for auditors to take up – auditing of smart contracts, consortium blockchains, system administrators, and arbitrators.
Third research describes an interview with Will Bible, a partner at Deloitte who specializes in audit innovations, which raises concerns regarding the idea of recording transactions on the blockchain due to the complexity and high cost.
As a result, there is no clear and unambiguous way to answer the research question due to the novelty of the topic researched. Thus, further research is advised.