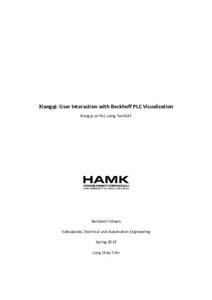 The aim of this project is to explore the extends of user interactions with visualization implementation in PLC application. It studies closely from how such visualization will be configured, the backend logic to keep things running and the data flow between the two entities can be organized. This will require a theme that would generate user interactivities, preferably intensive or a focal point of such theme. A Chess game, Chinese chess game or Xiangqi specifically, is henceforth chosen as the main theme for this application. The game by default requires its players to interact with itself by moving its pieces around the chessboard, the pieces’ positions streaming to the backend logic and correctly configuring the layout of the visualization for such interactivities. The experience gained from designing and implementing such application will translate into other industrial-based projects.