The role of libraries in avoiding hate speech and false information 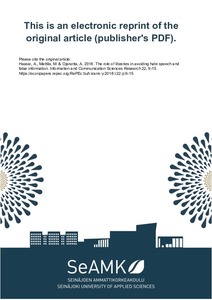 The role of libraries in the fight against fake news and hate speech is discussed in this article. Fake news can be understood as misinformation. On the other hand fake media which publishes fake news is not a new phenomenon and it has a long history.