Examining the Rheology and Shrinkage Performance of Low Carbon Concretes 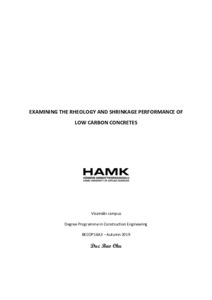 Chu, Duc Bao
All rights reserved. This publication is copyrighted. You may download, display and print it for Your own personal use. Commercial use is prohibited.
Näytä kaikki kuvailutiedot
Julkaisun pysyvä osoite on
http://urn.fi/URN:NBN:fi:amk-2019112823048

Construction globally consumes a great number of building materials such as steel, timber and aluminium. Concrete is one of the most commonly used materials. However, the production of concrete releases a significant emission, i.e. carbon dioxide, which has a huge impact on the environment. Some alternatives have been introduced to create low carbon concretes because of their less carbon footprint characteristic.

Three representatives are fly ash, ground granulated blast-furnace slag (GGBS), limestone. The differences between these materials in physical and chemical aspects change the behaviour of rheology and shrinkage at an early age. This Bachelor’s thesis outlines the characteristics of each material mentioned previously and considers their influence on the mix design of concrete. Instead of concrete, mortar mixtures were tested to simplify the effect of coarse aggregate on the overall result. In addition, the samples could be handled easily within a relatively small quantity.

It was found that the addition of GGBS and limestone resulted in the reduction of yield stress and viscosity owing to its high fineness in terms of rheometry (rheological behaviour). Fly ash, with a larger particle size than Portland cement, deduced the reverse trend by increasing flow resistance. Regarding the shrinkage results, GGBS itself made the sample shrink more. But when it is combined with fly ash, the result reversed. Limestone with less than a certain percentage of the total weight of the mixture showed a trivial change.