Has social media made students more of less connected? 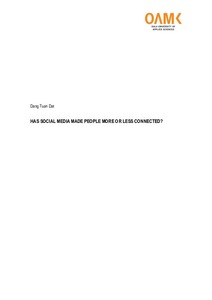 Smart phones are owned by nearly half of the world population, with which the access to social media on daily basis follows. With the rapid growth of technology, the popularity of social media skyrocketed as well, with almost everyone owning a smart phones using it. Due to the rise of this communication platform, the concern of how social media affects the connectedness between people arises. For this matter, the author sought to understand how social media affects its users’ connection. A sample size of 70 participants completed a quantitative survey regarding social media use, users’ well-being of emotion and connection including a mixing of multiple-choice and Likert-scale questions. The survey was distributed to the students of Oulu University of Applied Sciences via email and gathered the responses for two week. The result revealed the participants had aware of how to use social media beneficially for their connection and although the increase in time of using social media comes with the decrease in quality of time spending with friends and families, social media is still believed to support users’ connection.