“To motivate myself with good self-management" : developing an open-formed local diabetes course 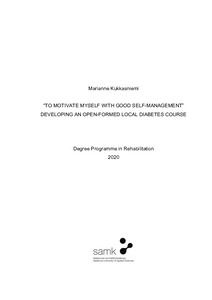 Kukkasniemi, Marianne
All rights reserved. This publication is copyrighted. You may download, display and print it for Your own personal use. Commercial use is prohibited.
Näytä kaikki kuvailutiedot
Julkaisun pysyvä osoite on
http://urn.fi/URN:NBN:fi:amk-202001311868

The vision of the Finnish Diabetes Association is to overcome diabetes every day. The idea is to place the people with diabetes and their closed ones in priority and support their lives by promoting health and well-being, looking after their interest, and providing peer support. From this ideology also the idea of this thesis was originated. The purpose of this thesis was to develop a local open-formed diabetes course for the Finnish Diabetes Association and its local branches to utilize together. The goal of the course was to support self-management of the people with diabetes and find out what kind of support the local branches need in organizing these kinds of courses.

The development work was done as a project and we used action research as a research method. The time to use for this project was limited and the idea was to develop and implement one course and to gather the data to create guidelines for the future. The diabetes course was planned together with the Porin Seudun Diabeetikot ry. and was organized in Pori. The target group was people with type 2 diabetes in the Pori area. The participants to the diabetes course were adults who were randomly selected from the received applications.

The result of this project was that peer led open-formed local diabetes course can be organized. This course was seen interesting; 37 people applied and 12 people with type 2 diabetes were selected. The participation rate to the course meetings was very high 98%. The participants were satisfied with the course content and implementation. They had realized that they are not alone with this disease and they can influence on their self-management. The guilt because of the diabetes diagnosis had reduced and their perspective towards diabetes had become more positive. Course had influenced on their daily routines by adding physical activity and changes in their diet.

The benefits of the locally organized diabetes course were that we were able to utilize the local branches knowledge and premises, peer support group leaders were amazing, and the course was cost-effective.

This project created information about this kind of co-operation and the guidelines for the future courses are ready to use. The results of this project are going to be used in the future to develop this kind courses together with the Finnish Diabetes Association and the local branches in different parts of the country.