Implementation of an Embedded System Networking and Vehicle Information Display 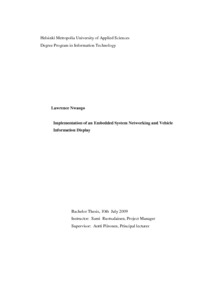 The purpose of the project was to implement an embedded system networking and vehicle information display. This was realized by the use of the Controller Area Network (CAN) as the protocol and the front end software Centrafuse for the display.

My task in the project which was the display of vehicle information has been completed and tested using a simulation program. The result was the display of information identical
to the stimuli. The other part, the implementation of embedded system networking is still in progress. When the entire project is completed, the design can be modified to be used in
other application areas such as elevators and heaters.