Bullying among youth in Russia: A study on the influence of social media 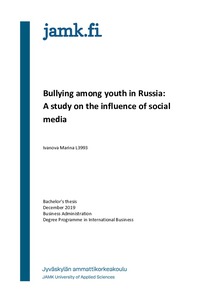 Ivanova, Marina
All rights reserved. This publication is copyrighted. You may download, display and print it for Your own personal use. Commercial use is prohibited.
Näytä kaikki kuvailutiedot
Julkaisun pysyvä osoite on
http://urn.fi/URN:NBN:fi:amk-202002142438

The thesis focuses on the topic of cyberbullying among youth in the Russian
Federation. Cyberbullying has become a major concern of both youth and adults
worldwide. As a comparatively new phenomenon in Russia, cyberbullying has grown
at an accelerated pace, and yet the internal and external triggers are not fully
understood. The effects of cyberbullying appear in multiple spheres of Russian youths'
life.
The objective of the study was to identify cyberbullying’s influence on Russian youth
by revealing behavioral patterns of the primary stakeholders, and to formulate a
theory that could stop or even prevent cyberbullying.
The data was initially collected through a survey and then through individual
interviews among young people who faced cyberbullying. Afterwards, based on the
insights gained from the youth sample, a focus group discussion was implemented to
more deeply understand the educators’ vision of the present situation.
The results shed light on young people’s experiences, their attitudes to social media
throughout each stage of cyberbullying, and most importantly, the level of youths'
and educators’ awareness of the phenomenon.
Based on the results and analysis, recommendations for cyberbullying prevention are
provided to help young people better understand the situation. Additionally,
recommendations contain suggestions for further research of cyberbullying.