Preparedness for Mass Gatherings: Factors to Consider According to the Rescue Authorities 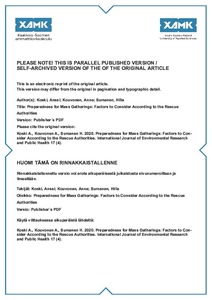 Lähdeviite:
Koski A., Kouvonen A., Sumanen H., (2020). Preparedness for Mass Gatherings: Factors to Consider According to the Rescue Authorities. , MDPI AG.

Background: Mass gatherings cause a need for multi-authority preparedness in order to ensure the safety of the event participants and to minimize delays in response for emergencies. Rescue authorities are key players in the pre-planning phase; however, their own point of view regarding all aspects of preparedness for mass gatherings is not well known. The aim of this study was to investigate what factors, according to the rescue authorities, need to be considered when preparing for mass gatherings.

Results: Three main categories emerged from the interviews: (1) co-operation in the pre-planning phase, (2) factors to be noted in the emergency plan, and (3) actions during the event. These categories were divided into 11 generic categories, which were further divided into 42 sub-categories.