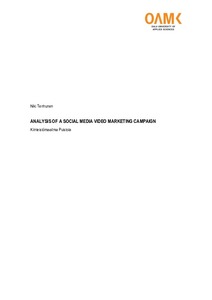 Tenhunen, Niki
All rights reserved. This publication is copyrighted. You may download, display and print it for Your own personal use. Commercial use is prohibited.
Näytä kaikki kuvailutiedot
Julkaisun pysyvä osoite on
http://urn.fi/URN:NBN:fi:amk-2020051812113

This research was done for Kiinteistomaailma PuistolaVälityspalvelu N & M Oy LKV. Kiinteistömaailma Puistola wishes to improve and strengthen its brand and had prepared a social media video marketing campaign. The commissioning company, as well as the real estate business in Finland, are said to be in crossroads of changing its marketing from traditional paper media to social media.

The purpose of this research is to determine and analyze whether the campaign was successful based on numerical data which illustrates the spread of the campaign and how well it reached the audiences. On the other also qualitative data will be used to find out what kind of effect did the campaign has on the company's brand image from the customer's point of view. The research method for this research combined from both quantitative and qualitative research. Quantitative data is gathered from the social media platforms and qualitative data was gathered from five semi-structured theme interviews. Relevant literature and articles, as well as researches, were used to gather the theory part supporting this research.

Based on the numerical data, the campaign reached the desired number of people. Also, the number of engagements generated by the campaign as well as positive feedback was in life with the expectations of the commissioning company. These interviews indicated that the campaign had either a neutral or positive effect on participants' views of the company brand. The commissioner company can utilize the results of this research when preparing their future campaigns.

This research can be used to help people understand how to measure and analyze the results of a social media campaign.