Development of an Internet of Things platform for Smart Agriculture solutions 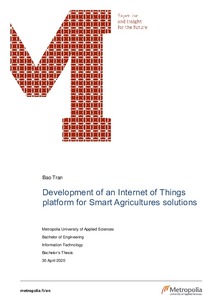 Tran, Bao
All rights reserved. This publication is copyrighted. You may download, display and print it for Your own personal use. Commercial use is prohibited.
Näytä kaikki kuvailutiedot
Julkaisun pysyvä osoite on
http://urn.fi/URN:NBN:fi:amk-2020060316679

Internet of Things recently receives a lot of attention as embedded devices and cloud technologies keep evolving rapidly. One of the most common IoT’s application is in smart agriculture system, where cutting-edge technology is used to increase crop productivity and plant quality.

GFarming is a young startup company that focus on developing smart agriculture solutions. The purpose of this final year thesis was to prototype a platform for the company to integrate with existed sensors and gateways using Spring, actor models and Apache Kafka as core messaging system.

Another aim is to study about reactive system implementation using the actor model, its interaction patterns and Kafka as a distributed messaging system. Even though it is a prototype, the application can still be scaled and developed further easily with acceptable performance for large amount of end user’s devices.