Exploring the triadic relation of urban form, wind, and air quality at street level : a case of City of London, UK 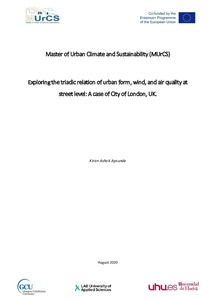 Apsunde, Kiran Ashok
All rights reserved. This publication is copyrighted. You may download, display and print it for Your own personal use. Commercial use is prohibited.
Näytä kaikki kuvailutiedot
Julkaisun pysyvä osoite on
http://urn.fi/URN:NBN:fi:amk-2020101621376

The triadic relation on urban form, air quality and the wind environment at street level in a dense setting of the City of London is investigated through detailed characterisation of the urban form, wind simulation and statistical analysis in conjunction with AQ data observations for the period June – December 2018. While there are a plethora of broad level indicators describing urban morphology and form at neighbourhood and city levels, this study has taken a detailed approach towards identifying the street level canyon and canopy related metrics that influence the urban wind environment and ambient air quality. While it has tried out some of the existing metrics, the study has also introduced a set of new parameters that may further aid in understanding the triadic relation. For over 826 canyons mapped in the study area, the study has analysed about forty-two (42) urban form and morphological metrics to understand the influence of urban form on the wind environment.