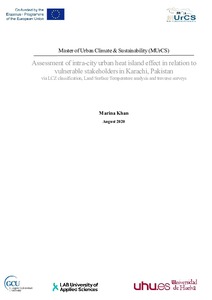 Khan, Marina
All rights reserved. This publication is copyrighted. You may download, display and print it for Your own personal use. Commercial use is prohibited.
Näytä kaikki kuvailutiedot
Julkaisun pysyvä osoite on
http://urn.fi/URN:NBN:fi:amk-2020102221540

Presently, the urban heat island (UHI) phenomenon and its impacts are gaining momentum as a major research focus in South Asian urban climate literature. However, the case of Karachi, despite recurring heatwaves and increasing temperatures in parallel with sustainability challenges of urbanization, governance, high-density and vulnerable population, lacks in-depth scientific investigations. Hence, this thesis explores the UHI effect in Karachi with respect to the urban morphology and assesses the associated drivers. The methodology employs the LCZ classification, remote sensing data and traverse/stationary devices and establishes the intraurban temperature differences along with temporal UHI intensity, hotspots, and heat sinks. The built form explored via LCZ classification identified a disproportionately heterogenous presence of all 17 LCZ classes with a significant mix of compact built-up classes in the city’s urban core along with a terrible lack of blue-green infrastructure. While the summer 2019 Land Surface Temperature along with traverse surveys carried out during the winter 2020 (January-February 2020) established the temperature anomalies among LCZs and the overall UHI magnitude. During the traverses, the nocturnal UHI magnitude was observed to be much higher than that of the day, with the maximum UHI magnitude of 3,0°C during nighttime and 1,5°C during the daytime. Moreover, the high-rise buildings presented with conflicting temperature patterns and served as the heatsinks in the day and the hotspots at night-time. Moreover, in combination with vegetation covers, they enhanced the cooling effects in different LCZ classes during the day. Meanwhile, the UHI effects were consistently found to be prevailing in the compact low-rise (LCZ3) zones.

This study also attempted the extrapolation of future growth/trends and anticipated intense densification in future which may push the UHI effect up, insinuating a likeliness for worse climatic impacts. The critical zones thus identified were simulated for mitigations in ENVI-met and quantified in terms of air temperature and MRT values to determine the degree of efficacy in various mitigation scenarios. Whereby, the midrise densifications seemed like a stable middle ground among density enhancement and climatic repercussions. Along with the midrise density recommendations, the cooling implications of mixed LCZs may also offer opportunities for policies in urban planning in avoiding the exaggerating UHI effects in future and may suit the practical realities of the heterogenous developing cities.