"The MoROLL" GOES TO HABITARE : From Idea to Prototype - The Evolution of A Designer and His Design 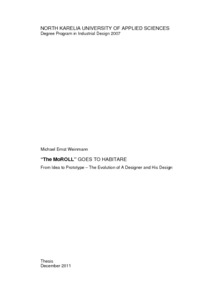 This study documents the history of the furniture design “The MoROLL”, and the design thinking behind it. It is the story of a design’s development from an idea, its participation in a worldwide design competition, and getting acknowledged there, to the building of a fully functioning prototype and its successful exhibition at the international design and furniture fair “Habitare 2010”.

As a progress report, it follows the designer’s metamorphosis from a dependent student into an independent professional, describes his personal growth, and looks critically at him and his environment. It shows the innovativeness and "outside the box" thinking in ideation, design development, prototyping, tooling and execution.

The thesis follows the development of design and designer chronologically over the course of more than two years, starting with the idea’s original conception as early as September 2007. It explores the human aspects of human-centered design; the human needs, which led to the design idea, and the human nature of the designer, which gave the idea a form, which became a design with a function. The report shows how the designer learned by doing, by taking small steps, and how intuition, commitment, trust, and support from unsuspected sources helped the project along. Trials and errors, failures and successes are documented in equal measure. The author reflects on lessons learned in the process of designing, and his development and growth as a designer, and in the end as a person.