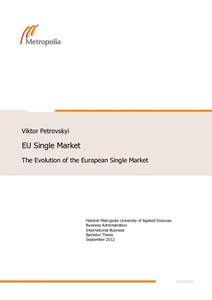 The purpose of this study paper was to define what is the EU Single Market in theory, how it began and to compare it with the current reality. Problems achieving political objectives in the 1990s. Also, what it has turned into today i.e. the EU’s enlargements 2004 and 2007 to 27. Demographics and what kind of economic convergence takes place in new member states.

The methodology used in this study was qualitative. They consisted of both source books and newspaper articles, and the internet news agencies e.g. Financial Times, Telegraph, and web sources of the European Commission.

The results revealed that the Union has many issues and failures. It is also clear that stability is difficult to maintain as many factors influence the situation of the Union e.g. different economies of the member states in the South and North, convergence issues. GDP is not a perfect measurement to see what is going on because even if the GDP is high it may not mean that a state is wealthy.

The conclusion of the study was that the EU is a political union. Its enlargement is hard to understand as the criteria used to assess eligibility of a state are very subjective. The contemporary issues with such member states as Latvia, Greece, Ireland, Spain and Estonia joining Euro currency as an example of success while other states struggle make the EU look very political union rather than economic one.