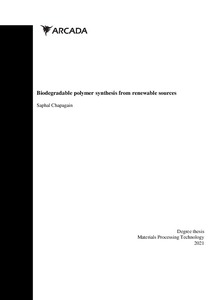 Chapagain, Saphal
All rights reserved. This publication is copyrighted. You may download, display and print it for Your own personal use. Commercial use is prohibited.
Näytä kaikki kuvailutiedot
Julkaisun pysyvä osoite on
http://urn.fi/URN:NBN:fi:amk-2021060113024

In this study, pectin was extracted from fruit peels and used it for the synthesis of plant-based polymer. Pectin was extracted from fruit peels with acid boiling and washing with ethanol. The extracted pectin was used to produce the bioplastic samples. The bioplastic samples were produced by doing acid hydrolysis. 0.5M HCl, and 99% glycerol were used as a plasticizer during hydrolysis. The residence time for hydrolysis was 30minutes and
NaOH was used for neutralization. The samples were dried in oven at 500 Celsius for 24 hours sample was produced with analyzed with FTIR spectrometer and a biodegradability test was done using home compost. The duration of biodegradation test was 30 days, and all the samples were more than 90% biodegraded.