Sound exploration as a small group activity in a Finnish daycare 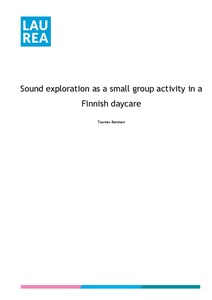 Sound exploration as a small group activity in a Finnish daycare (3.887Mt)
Lataukset:

Raninen, Tuomas
All rights reserved. This publication is copyrighted. You may download, display and print it for Your own personal use. Commercial use is prohibited.
Näytä kaikki kuvailutiedot
Julkaisun pysyvä osoite on
http://urn.fi/URN:NBN:fi:amk-2021061115715

The objective of this bachelor’s thesis was to create a small-group activity for 4-to-6-year-old children which was about exploring sounds and music with modern music equipment. The thesis is activity based and it was done in cooperation with working-life partner, a Finnish daycare. The activity was implemented in the daycare setting and it was aimed to create a joyful and exciting atmosphere for the children to explore the world of sounds.
The theoretical framework consists of Curriculum for Early Childhood Education and Care (ECEC), art education, sound and music education, development of 4-6-year-olds (which includes areas of emotional, motor, and musical skills), sound and music exploration, and small-group activity.
The thesis process consisted of designing the activity and implementing it in the daycare setting with having 6 separate sessions. The sessions consisted of recording, manipulating, and playing with recorded sounds. Parts of the sessions were captured into a video which was further edited into a summary. The summary was shown in the daycare as a premiere event, and it was sent to the guardians of the children.
The outcome of the activity was measured by observing the children and asking verbal feedback from them and the working-life partner, which was in this case a teacher of the daycare. The outcome seemed very positive and there was joy and excitement during the sessions. The children seemed to be inspired of exploring the recording, manipulation, and playing with the sounds and they seemed to be interested in the modern music equipment and technology.