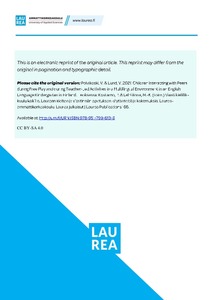 The purpose of this study is to find out how children interact with each other during free play and teacherled activities. It contributes to the study of children’s interaction, addressing the importance of children’s relationships between peers and teachers and the importance of the social situations around them. The focus is on the interaction and the uses of language between these two settings and the differences between the two pre-school groups. This study was conducted in a multilingual kindergarten. The professionals spoke English and children came from different cultures with various native languages spoken at home. Observations of 24 children (2-5 years) in play situations and teacher-led activities were analysed with interaction as the primary focus. The findings include components of children’s interaction such as uses of language interactions in conflict situations, verbal and non-verbal communication, and the importance of peers and cooperative interaction.