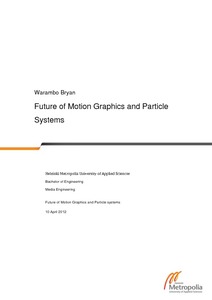 The purpose of this research is to study the use of particle systems in motion graphics, which is known to be the most popular graphics tool for multiple animated elements. It is known to be a procedural animation because as the emitter builds up more particles are formed to create a motion effect. At the same time exploring the future of motion graphics and Particle systems connection and the relevance it has in terms of longevity in being a major post-production element in digital media. This research includes a breakdown of how these plug-ins and elements are put together which is known as composition. While expounding more as to why motion graphics will never end but only get better. The main software used in this research will mainly be Adobe after effects and Photoshop.