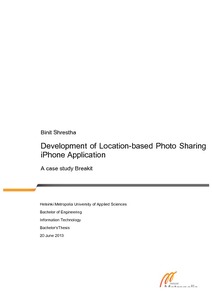 The primary purpose of the project was to build an outstanding location-based photo shar-ing iPhone application named Breakit for a start-up company named Eighty-Five Media Oy. The core functions of the application were displaying the photo feed based on the user’s current location and the ability to take photo, write some comments and upload to the Breakit server and other social media such as Twitter and Facebook. The main goal of the project was to develop the application and release it globally on Apple Store. On the other hand, the project was an attempt to implement the knowledge of iPhone programming learnt over the years at the university and to learn and practice agile software development in the production environment with a multinational team.

For the Breakit server, relatively new technologies such as Node.js, backbone.js, Mongodb and coffeeScript were used and for the client, iOS frameworks and some third party open source projects for iOS were used. The project was deeply concerned only with the iOS frameworks and other third party open source projects. The integration with Facebook, Twitter, Foursquare and obtaining the relatively accurate location of the user were the core features that the project dealt with. Apple’s official documentation, various iOS program-ming books and online materials were gathered and used during the project.

The application was released on Apple Store for global audience. Hence, the iPhone user would benefit by using the application and as for the iOS application developers, start-up workers and the iOS programming students, the project can be a guidebook to develop for location based services, social media integration and Apple Push Notification Service-enabled application.