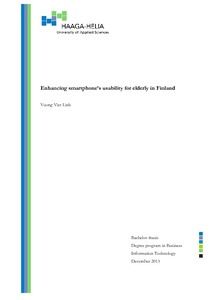 By the end of 2007, 16.5 percent of Finnish population are older than 65, and this percentage was predicted to be double in next 30 years. However, only a small amount of smartphones were able to be accepted by elderly, mostly because these devices are too hard to use.

Application developers are usually in lack of interest in this special group of users. Even if developers want to create applocations for this group, the lack of guidelines theoretical foundations leave their applications nearly unusable by elderly.

The purpose of this research is to discover what are elderly’s needs and capabilities when using mobilephones. In order to carry out the research, three methods of usability testing were applied from the total of 17 questionnaires, 5 personal interviews and 4 participation observations .

The result showed some important improvements would make mobile’s application more usable for for elderly. Some studies by other researchers are also summarized into a general guidelines for application’s design. Many popular incorrect usability examples are also listed to be avoided.