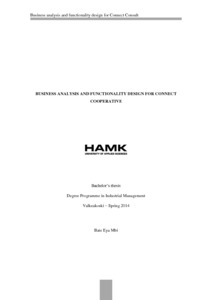 This thesis was aimed at establishing what were the business requirements for a small start-up company in the name of Connect Cooperative. The commissioning body of the thesis is HAMK UAS indirectly doing so on behalf of the Connect Consult start-up which itself generated from the Connect project in which students and staffs of HAMK contributed by running various sub researches and information.

From this business requirement a set of technical requirements were being generated with a major restriction placed on the project or research scope limiting the project to the soft-component of the system in accordance to Sun Java’s guide on deployment planning clearly stating the importance on placing boundaries so as to avoid infinite scenarios or situations. The search starts by clearly identifying the adopted organization structure of Connect cooperative and presenting and classifying the proposed start-up’s services. The thesis further goes on to articulate how this organization structure and proposed services could be integrated into an online or virtual portal aimed at various purposes but with a major aim of assisting the start-up deliver value and services to its customers.

Information gathering was done verbally by attending various meetings with the start-up’s members and also requesting information from the start-up directly such as their previous research results like the one they did in order to identify their human resources.

In order to achieve results of standards, guides were being used so as to give a step by step method used in result achievements with a major use of the Sun java’s enterprise deployment plan –white paper guide. The business requirements were identified as the business constrains and a technical requirement with respect to the project from which the use cases were used representing and designing the system's functions.