Investment Climate of the Russian Federation and Its Petroleum Industry 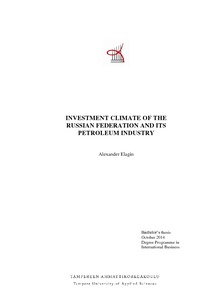 The image of the Russian Federation has been changing in the past years, making it difficult for people to understand what Russia is and where it is heading. The uncertainty makes investors avoid projects in Russia. At the same time the Russian Federation is one of the major powers in Europe, engaging in heavy trade and economic relationships with many European countries. For some Russia is major trade partner, for others it is an important and reliable supplier of natural resources. The differences between Russia and European countries are harmful for all the Europe and Russia’s deeper integration in Europe will benefit all the economies of the region in the long run.

The objective of this thesis is to make a comprehensive analysis of the investment climate of modern day Russia and its economically most viable petroleum industry. It will give an answer to why investors are avoiding Russian economy. After finding problems, it is important to show how the situation is changing and, based on that, to form predictions that will be useful for people looking to invest in Russia. In the end, this thesis will help people understand Russian economy and make an investment decision.

In order to give a full picture, the thesis deals with the general investment climate and that of the petroleum industry separately. The general analyses includes economic, legal, business and political environment in Russia and the second part deals with industry specific factors.