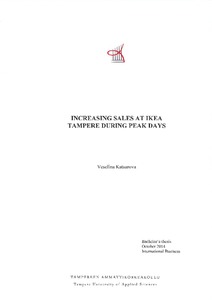 Relying on theoretical background on store layout, service design and lean process improvement, the current thesis reviews the processes, routines and visual communication at IKEA Tampere and offers solutions for making improvements which would increase the sales.

Most solutions for improvements offered in the current thesis have to do with lean process improvement, at the core of which lie the elimination of any unnecessary work which does not offer value to the customers. Thus, unnecessarily long and complicated processes at the store can be simplified and shortened making it possible to eliminate long queues and making it easier for customers to manage on their own in IKEA Tampere, the concept of IKEA being that customers should manage almost exclusively on their own. The implementation of the suggested improvements of the processes and the visual communication at the store will have a positive effect on the sales and on customer satisfaction.

Chapter 6 of the current thesis, which reviews the case of IKEA Tampere and offers concrete suggestions for improvements and solutions to the current problems at the store, is confidential for five years.