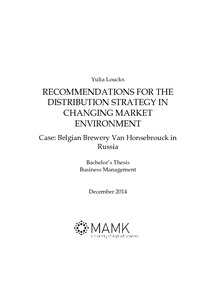 The efficient distribution strategy formulation becomes vital to the success and survival of any organization, especially when it is involved in international trade. Today’s world is particularly challenging due to rapidly changing market conditions. Therefore, in order to able to compete, satisfy customers, and meet the needs of other stakeholders profitably, it is crucial for any company to make profound market environment analyses, react to changes in the market and adjust strategies accordingly. Otherwise they will significantly affect the company’s performance.

Belgian Brewery Van Honsebrouck, the case company for the research, exported its beers to Russia. The demand was high, and the company set its hopes on Russian market. At the same time, the marketing conditions in Russia were getting unstable, and they were expected to have a negative impact on the company’s performance. Consequently, the objective of the thesis was to analyse the current distribution strategy and market situation, and give recommendations for the distribution strategy of the brewery Van Honsebrouck in changing market environment in Russia.

The theoretical part of the thesis was formed on basis of the studied theory regarding the position of distribution within international marketing strategy, distribution management, development of channels of distribution, as well as various environmental forces affecting company’s performance. The structure of the empirical part is based on the developed theoretical framework. Primary and secondary data was collected and analysed. The valuable results were produced. Semi-structured interview conducted with the case company revealed the details of the present distribution organization. The interview with the company’s distributer gave clear understanding of the distributer’s operations and its collaboration with the brewery. Their opinions on the market situation and the beer industry in Russia were collected. The review of electronic sources revealed the extreme complexity of the macro-environmental and the beer industry situations in Russia. Some growing tendencies were identified. Based on market segmentation and targeting, the ultimate customers were profiled and the geographic locations where they can be found were identified.

The gained knowledge gave the insight into the current marketing situation and the beer industry in Russia, present distribution organization and its effectiveness. The recommendations for the distribution strategy are reasonable suggestions that can be adopted by the brewery to react to the changes.