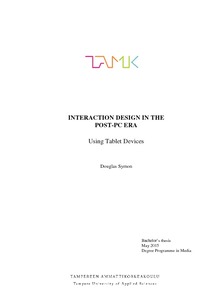 It turns out that to do interaction design in the post-PC era, one actually needs to use a personal computer, despite this thesis being entirely written on a tablet device, which was the starting point for this thesis. It explores the positives and negatives of tablet computers with a retrospective conclusion on the subject.

The main topic of this thesis is interaction design, which is defined and explored through surveys and interviews that guide the exploration on whether the work has changed. In addition, more unusual forms of interaction design in community management and the gaming experience are investigated. There are additionally proposals and conclusions of interest to anyone in the interaction design field and beyond.