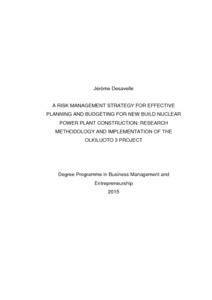 The purpose of this thesis was to understand the delicate concept of project success and the factors which contribute to it. Nuclear new build industry faces tremendous challenges to make the construction of new power plant accepted by the people and the politics. Public acceptance after Fukushima disaster is more than ever a necessity to undertake successfully such major construction. As well, the question of nuclear wastes will involve generation and generation of people and therefore add costs anduncertainties. A construction of a new nuclear power plant faces a lot of uncertainty due to technical complexity and many other factors. Among those factors, certainly managerial factors contribute to success or non-success of the project. All these factors constitute risks for the project. Without any doubts, risks are actually not new for the nuclear industry. More than any other industry, the nuclear industry has gained an extraordinary level of knowledge of their operating risks such as seismic risk or core melt risk. However, the researcher built this research based on a previous research
finding, that there is a correlation between risk management and project success during the project phase. Firstly the research attempted to define metrics to measure the project success. Based on previous research, the researcher identified that six project metrics was to be measured in order to grade the project success. The research conducted
was a case study of Olkiluoto 3. The research used a quantitative survey to determine first the project success rate and secondly to estimate the level of risk of identified managerial factors. The researcher identified six managerial factors which can influence the project success if not managed. The research aimed to estimate the probability of residual risk after mitigation by estimating the actual level of likelihood of occurrence and by estimating the actual level of significance. The research found first that the project success was found moderate. The research found that there is no statistical correlation between managers and non-managers in the perception of the project success. Lastly the research found that the actual level of risks is very high. This showed that mitigation measures were not sufficient.