The Attentional Drift-Diffusion Model for Simple Choice in the Quaternary Case, Measuring the Effect of Permutation of Item Location on Choice Behaviour 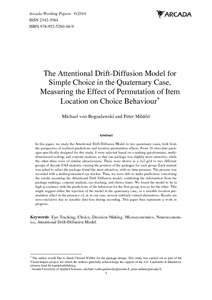 In this paper, we study the Attentional Drift-Diffusion Model in two quaternary cases, both from the perspective of realized predictions and location permutation effects. From 16 chocolate pack-ages specifically designed for this study, 4 were selected based on a ranking questionnaire, multi-dimensional scaling, and conjoint analysis, so that one package was slightly more attractive, while the other three were of similar attractiveness. These were shown in a 2x2 grid to two different groups of Arcada UAS students, varying the position of the packages for each group. Each student was asked to select the package found the most attractive, with no time pressure. The process was recorded with a desktop-mounted eye tracker. Thus, we were able to make predictions concerning the results assuming the Attentional Drift Diffusion model, combining the information from the package rankings, conjoint analysis, eye-tracking, and choice times. We found the model to be in high accordance with the predictions of the behaviour for the first group, less so for the other. This might suggest either the rejection of the model in the quaternary case, or a sizeable location permutation effect in the presence of, as in our case, several similarly valued alternatives. Results are non-conclusive due to sizeable data-loss during recording. This paper thus represents a work in progress.