Digital visuality and social representation. Research notes on the visual construction of meaning 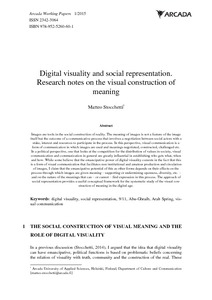 Images are tools in the social construction of reality. The meaning of images is not a feature of the image itself but the outcome of a communicative process that involves a negotiation between social actors with a stake, interest and resources to participate in the process. In this perspective, visual communication is a form of communication in which images are used and meanings negotiated, constructed, challenged etc. In a political perspective, one that looks at the competition for the distribution of values in society, visual communication and communication in general are greatly influential in establishing who gets what, when and how. While some believe that the emancipative power of digital visuality consists in the fact that this is a form of visual communication that facilitates non institutional and amateur production and circulation of images, I claim that the emancipative potential of this as other forms depends on their effects on the process through which images are given meaning – supporting or undermining openness, diversity, etc. – and on the nature of the meanings that can – or cannot – find expression in this process. The approach of social representation provides a useful conceptual framework for the systematic study of the visual construction of meaning in the digital age.