Business growth in established companies : roles of effectuation and causation 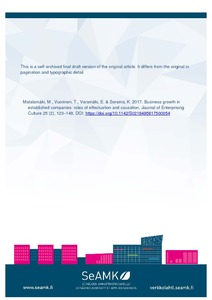 This multiple case study illustrates how ten selected industrial companies have managed to accomplish rapid growth after a long period (3–5 years) of slow growth. A particular aim was to determine whether these companies grew by adapting to the situation and responding to the demands of the market with their resources (effectuation) or by following previously determined plans and proceeding towards set goals (causation). Effectuation was originally connected to the creation of new business activities and an operating model covering the early stages of an organisation’s growth. However, recent studies have considered effectuation in the context of an existing business. This paper adds business growth to the context of established companies and explores the roles of effectuation and causation in their growth processes. The findings indicate the usage of both logics, but in nine of the ten companies’ effectuation influences as the dominant approach. Only one of the ten studied companies can be stated to follow the operating principles of causation.