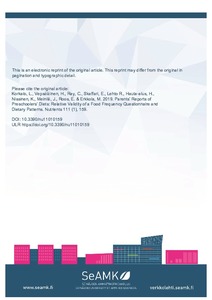 The accurate assessment of food consumption is crucial in nutritional studies. Since modern nutrition science has become more interested in diet as a whole, studies validating food frequency questionnaires (FFQs) and exploratory dietary patterns are needed. We aimed at examining the relative validity of a 47-item FFQ against three-day food records among three- to six-year-old Finnish children, as well as investigating the consistency of the dietary patterns derived using the principal component analysis (PCA), with food record and FFQ data as inputs. We conducted the PCA without forcing the food record data to match the FFQ items. Altogether, 75% or more of the participants were classified into the same or adjacent quarter of vegetables and fruits as well as sugary food consumption. Furthermore, the intake of folate and vitamin C increased linearly in the quarters of vegetable and fruit consumption, as did the intake of sucrose in quarters of sugary food consumption. Three fairly similar dietary patterns were identified from food records and FFQ data. Concerning the patterns, more than 70% of the participants were classified into the same or adjacent quarter. However, the Spearman correlation coefficients between the respective pattern scores were low (0.25–0.33). The FFQ showed acceptable validity when ranking food group consumption compared to food records. Additionally, the FFQ-derived dietary patterns were consistent with those derived using food record data.