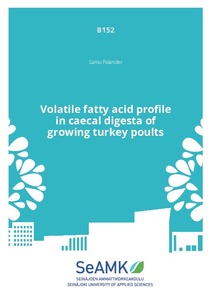 Short-chain fatty acids or volatile fatty acids (VFA; containing acetic, propionic, butyric, valeric, caproic, isobutyric and isovaleric acid) can be studied as indicators of digestion and carbohydrate fermentation in avian caeca. An experiment with a total of 320 growing turkey poults was carried out to determine VFA concentrations in the caeca at 4, 8 and 12 weeks of age. The diet of the turkeys consisted of pelleted maize, wheat, barley or oats as such or supplemented with beta-glucanase-xylanase enzyme. Concentration of acetic acid was the highest among VFAs, the concentration reaching from 0,104 to 0,458 mg/g digesta and the proportion from 58 to 76 per cent of total VFA. Concentrations of propionic acid and butyric acid reached from 0,0075 to 0,0705 mg/g digesta and from 0,0180 to 0,2454 mg/g digesta, respectively. Significant interacting effects of bird age, cereal species and enzyme supplementation occurred on concentration of most VFAs. Generally, concentrations were higher in older birds and in enzymesupplemented diets.