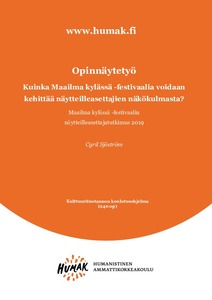 Cyril, Sjöström
All rights reserved. This publication is copyrighted. You may download, display and print it for Your own personal use. Commercial use is prohibited.
Näytä kaikki kuvailutiedot
Julkaisun pysyvä osoite on
http://urn.fi/URN:NBN:fi:amk-202102182454

World Village Festival is an event held annually on the last weekend of May in Helsinki Kaisaniemi Park and Central Railway Square. The popular multicultural and multi-arts festival had its 20th celebrational year in the year 2019 and brought once again together festival-goers with a large and diverse group of exhibitors such as Fingo's member organizations, NGOs and CIVICs organizations, authorities, schools, private companies, and others. This thesis is based on an opinion poll commissioned from Suomalaiset kehitysjärjestöt - Finnish Development NGOs Fingo ry, who is also the host of the festival. The survey examines exhibitor's satisfaction in the festival and organizer. The thesis analyzes how the event can be improved from the exhibitor's point of view by examining the results from the quantitative internet survey. Question types used in the survey include multiple-choice, open and closed, scale-questions a Net Promoter Score question, and propositions. The theoretical framework of the thesis describes World Village Festival as a fair event and forum for NGOs and CIVICs organizations. In addition to that, the theoretical part explores trade fairs in general, the purpose of networking-events, and facilitation as a means to improve networking experience. According to the results of the survey, the exhibitors are satisfied with the festival and its organizers and results continue to show similar outcomes as in prior surveys made for the festival. The only bigger setback this year was the exceptionally bad weather, which led to a smaller audience than usual and to disappointment among exhibitors. The school grade given by the exhibitors only showed a small decrease of 0,3 percent compared to last year. The most popular development suggestions among exhibitors were: more learning among the exhibitors, more get-togethers and networking-events in advance and, the exhibitors should get more exposure during the making of the festival. In the last part of the thesis, I reflect on the most popular suggestions and present my own interpretation to the organizer of the festival, appropriating the results of the survey and theories established.