Do stressed children have a lot on their plates? : A cross-sectional study of long-term stress and diet among Finnish preschoolers 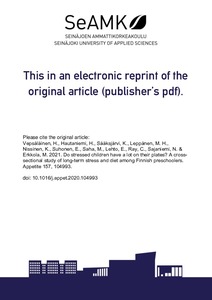 We examined the association between hair cortisol concentration (HCC) - an indicator of long-term stress - and diet among preschoolers in a cross-sectional design. The participants were 597 Finnish 3-6-year-olds, and the data were collected in 2015-16. We used 4-cm hair samples to analyze HCC during the past four months. Food consumption was assessed using a food frequency questionnaire, and we used consumption frequencies of selected food groups as well as data-driven dietary pattern scores in the analyses. The parents of the participating children reported their educational level and family income. The researchers measured the children's weight and height. We examined the associations between HCC and diet using multilevel linear mixed models adjusted for age, gender, the highest education in the family, household relative income, and child BMI. Higher HCCs were associated with less frequent consumption of fruit and berries (B estimate -1.17, 95% CI -2.29, -0.05) and lower scores in a health-conscious dietary pattern (B estimate -0.38, 95% CI -0.61, -0,14). Higher HCCs were also associated with more frequent consumption of sugary beverages (B estimate 1.30, 95% CI 0.06, 2.54) in a model adjusted for age, gender and highest education in the family, but the association attenuated after further adjustments. Our results are parallel with previous studies that show a link between stress and unhealthy diet. In the future, longitudinal studies are needed to establish a causal relationship between stress and diet among children.